Rhinoplasty or Nosejob is one of the most popular and effective methods of cosmetic surgery that does not even know the age. The nose is one of the most important components of the face that has a direct impact on a person’s beauty and attractiveness. Rhinoplasty is a way to have a more shapely nose. 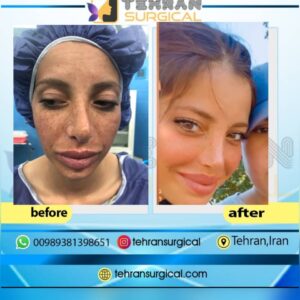 is the primary method of rhinoplasty and has been used by many rhinoplasty surgeons for a long time. In this method, a skin incision is not made on the columella (the wall between the two nostrils). And all the incisions are made from inside the nose. The advantage of this method is the lack of skin incision and the disadvantage is the lack of direct view of the surgeon to the internal structure of the nose.

: It is a newer surgical method. In this method, a skin incision is made on the columella, the skin on the nose is completely pushed upwards and the surgery is performed under direct vision. The disadvantage of this method is the need for incision of the skin and more swelling after surgery than the closed method, but the direct vision of the surgeon during surgery will help to achieve better results and correction of asymmetries and crooked nose will be easier and more possible for the surgeon .

It has a hump on the nose in terms of appearance.
It is strong in terms of cartilage structure and bone tissue
In terms of skin, it has a thin skin so that the nasal bone is palpable.

Combined noses are a combination of fleshy and bony noses.
In addition to having a hump on the bridge of the nose at the tip of the nose, such as fleshy noses, this group of noses may have a broad shape and thick skin.
Surgery of these noses will be more successful the thinner the skin of the nose and the stronger the tissue and cartilage.
Postoperative care of the nose
Each surgery is associated with inflammation of the tissue around the area being operated on. The amount of swelling in the tip of the nose varies from person to person.

Keep your head above body level at bedtime for at least 2 weeks after surgery.
When resting, apply an ice pack to the nose and middle of the face. Ice packs are only effective in the first 48 hours after surgery to reduce swelling and bruising after rhinoplasty.
Avoid bending or lifting heavy objects for two days. Doing these things, in addition to exacerbating swelling, raises blood pressure and increases the likelihood of bleeding.
Avoid overexposure to sunlight for 4 weeks after rhinoplasty. However, if you use sunscreen with SPF 30 every day, you can be exposed to normal sunlight.
Avoid getting your nose bandaged wet during postoperative care. If your nose bandage gets wet, dry it gently.
Do not blowing your nose for two weeks after surgery. This can cause bleeding. During the second week you can blowing your nose in the bath. You can use saline spray to clean your nostrils.
Avoid scratching your nostrils or the base of your nose with a tissue or your hand.
There may be dry mucus in the nose and around the holes or a closed scab. This area should be cleaned using hydrogen peroxide or hydrogen peroxide

Preoperative care of the nose

Before rhinoplasty, care is needed that the person seeking surgery should pay attention to in order to have a better recovery period. Here are the things to look for when selecting yours. But note that you should consult your doctor for more detailed information.

Swelling of the nose

One of the most common questions about rhinoplasty is the process of relieving rhinitis. A frequently asked question is how long does swelling go away after surgery?
In answer to this question, it should be said that the speed of wound healing depends on the thickness of the patient’s skin.
If the thickness of the nasal skin is less,and so-called more bony nose) the swelling will subside sooner and the thicker the skin ,the later the swelling goes away